No news since last time really! No cats have got in, no cats have got out. After the initial attempts they have not tried really, so all looking very good! Perhaps one point of interest was during the snow. It weighed the netting down quite a bit, but when it melted it went back to its normall shape, I was worried it would have stretched a bit, but no, all is well.

Eventfull day today! Caught Phoebe trying to escape. Front paws over the fence, back legs hanging on, but couldn't get any grip on the fence and just dropped. The cat flap was installed today, so we'll gradually start letting them out when we're not here/during the night over the next couple of weeks. We also had another visit from the black cat today - a bit of eyeballing from the top of the fence, but again did not manage to get into our garden, so all going very well still!

Spoke to soon! Spotted one of them digging under the fence. There was some loose mud blocking a gap they had previously used to go next door. We've blocked this over with some wood now. 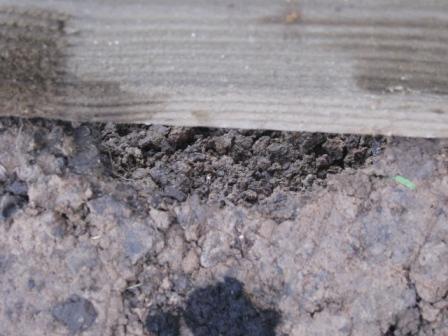 Spotted one of the local cats (the one that caused the ear injury!) on the fence, but it made no attmpet to jump into the garde. Cats seem very content in the garden, no attempts to break out so far.

Finished the fence off today and let the cats out! They still don't have a cat flap, so for now will only be allowed out whilst we're in. They both jumped up the fence and tree's a couple of times, then spotted the netting and just dropped down! For the next couple of hours they didn't seem to show any interest in leaving the garden at all.